Deli Banger, known the world over as R.City’s Official DJ is quickly becoming known as one of the hottest music producers from the Virgin Islands. One of his most recent projects ‘Slow Motion’ performed by International Recording Artist Pressure — indeed a club banger! #POSHgirls this song has to be one of the sexiest songs we’ve heard in along time! We caught up with the genius behind the music to learn more:

How did “Slow Motion” come about?

Slow Motion came about while working on an album together with Pressure. We’re in the process of making an EP together and this was the third song recorded for it. A song named ‘Raw’ is the first which was the song that brought about the idea of doing the album. Then ‘Grown Man Cry’ which was released earlier this year, Then ‘Slow Motion’.

Can you talk to me about the production process?

Production with me is all vibe. For some producers it’s a mathematical equation but for me its a vibe. Either I’m feeling it or not. I have no specific Process in how I make my music. Sometimes I may have an idea in my head that I just need to get out, Other times I may just like the sound of a riff, or an instrument. For instance, R. City’s ‘Fete You’, We made that song on the back of the tour bus while on the Maroon 5 tour. The beat at the time was just the intro which was an Instrument that I loved the sound of and some chords I stumbled across while messing around with the piano. The beat that Theron wrote the song to was a Drake-like, type of R&B/Caribbean/ Idea which consisted of the chords you hear in the intro, a kick and snare. Theron wrote the whole song to those instruments. I played around with it for a couple of months, made a few different styles of beats until it got to what you know it as today. We have a saying that “a song isn’t finished until its released”.

You’ve worked with Pressure before, what is that like?

Working with Pressure is like going to a comedy show — jokes, jokes, jokes and more jokes –amazing vibes every time. I’ve learn a lot about life from Pressure, he always gives you his honest opinion which gives you a different point of view most times also. We were great together cause he’s willing to come out of his element and I’m always ready to try something that hasn’t been done before.

How long have you been Dj’ing and producing?

Producing kind of been a lifelong thing for me. I started playing instruments around 3 years old. By the time I got to 4th grade and joined the band in school, I could play about 4 instruments by ear. I learned to read music in school and picked up every instrument possible. When I didn’t have a beat machine or couldn’t afford one, I would take two tape decks and record an instrument on one tape, then playback and add another instrument with another. lol Looking back at it now I’m like I came a very long way. Djing came about after I graduated High school in 2002. All my friends were deejays so it came natural.

How did the relationship with RCity begin and how has the experience been?

To be honest I don’t know exactly where it initially begins, I would always either run into the guys at gigs, or whenever I was in Atlanta for any reason I would link Timo and swing by the studio. It’s funny cause I produced a song named ‘Og’s’ which Timo had a verse on and he didn’t know I had produced it. LOL – When they were putting out the album ‘What Dreams Are Made Of’, they were in need of a full time exclusive dj. The guys fully believe in fulling the Road staff with “VI MAN” lol so then Timo Linked me. I packed up and moved to Atlanta about a week later. The experience to me has been that one in a lifetime never ever thought I would accomplish this dream type of experience. We performed at Madison Square Garden, some man from VI did that. We went on tour with some real life rock stars named Maroon 5.  Yup! Some Man from the Virgin Islands did that. 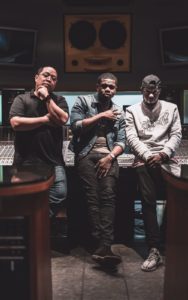 What would you say to anyone trying to get into the entertainment industry?

‘Start’, I tell everybody that – just start. Think big but start small. Most people say they don’t know where to, I say just start. Write a song, make a beat, and tell a friend to tell a friend. Watch 1 fan turn into 20 then in to 100 then into 100 but you got to start. Don’t make your career dependent on nobody. Always put yourself in a position to win. Remain humble – a big thing for me is to remove emotions from business. The music business isn’t pretty, it isn’t nice, but you got to make logical decisions. If you don’t you will make a lot of decisions out of anger and that’s never a good thing — but at the end of the day start. Set goals for yourself and accomplish them all. Oh and enjoy every bit of the ride. Even the parts that really suck. One day you will look back at it and appreciate it even more.