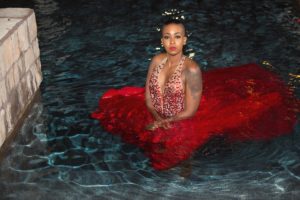 The enviable Billboard Charts has placed her debut album by VP Records aptly called “Break the World” on top, and Trinidad’s power soca queen Lyon Empress is simply over the moon.

With an innate love for music and life, Fay-Ann Lyons is intent on ensuring that the world soaks up the beautiful magnetic rays of her music, one beat at a time graced with her own original lyrical prowess.

Her country’s rich cultural tapestry, steeped in strong African and Indian musical forms have been saluted.  From the hypnotic Din Ta Da, inspired by indigenous Indian Chutney soca rhythms to Block the Road’s Ghanian- influenced Afro-Soca jam, the album is very delicious. Another favourite Catch Me built on the electronic dance music, graces the music feast along with Raze, classic All Over (2012) and Heavy T Bumper from 2009 which made Lyons win the coveted Groovy Soca Monarch and Carnival Road March crowns.

Fresh from her performances at this year’s Trinidad Carnival she took time out to talk with Caribbean POSH. Filled with sheer happiness and joy she spoke about her latest achievement saying” “this Billboard accomplishment is a great step in the right direction and shows that with the right work and right team we can accomplish a lot.”

Still elated with her album she said: “the music is in a position to become a fixture on the markets that has eluded us as, as its’ fresh and its’ sound is considered new. All the different types of fusions, what we have done with it was great, as it will add to the point that the Sound of Soca is capable of being included in any format, style, and genre, and also built for expansion if  the producer wants to experiment.”

She added: “it is a good feeling knowing that you can and are contributing to the success of something that has not been constant and consistent for us for years… recognition on a recognized platform. We as a soca community are working to help it get global acknowledgement and solidify it internationally.” 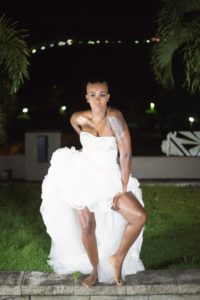 A natural stand-out, young Lyons possesses a purely magical smoky voice, and uses the pen to unleash her poetic genius with ease.

Growing up as the daughter of calypso royalty (Superblue and Lady Gypsy) allowed her some privileges, but made her dig deep into her strength reserves to become the woman, mother and wife she is today.

“I grew up being the child of two very young parents who could not get along and everything played out publicly. So my strength kind of came from going to school, and having to deal with seeing my mother and father being on the front page of the Trinidad Express, and having kids come at you for all these different things” she remembered.

They (children) can be cold when they are ready. But I had to still stay focused, still not shy away from going to school or having friends. Or go within myself and shut out the world. It took a lot. That’s when I realized, that few kids could actually say they had withstood that pressure” she added.

“When Carnival is finished, we start touring on the road from country to country. Sometimes we do different types of festivals, not just carnival festivals. Then we are recording internationally in Los Angeles and other places.”

On this year’s Carnival, Lyons said: “It was good. A lot of people see carnival as a time of revelry, hanging out, freeing up and enjoying themselves, but, it’s a business for me, number one, and I am always looking at it from the aspect of promotion and marketing that sort of business side of it.”

Nevertheless, “I enjoy some of these events, and its’ nice to stay a little bit longer when you not rushing from event to event.”

Having a nurturing relationship with her daughter she shares with husband is important, amidst the heavy demands of a show business career.

“I did not have a father figure present in the house and having a mother that I think was not living up to the full potential of being an actual parent.  A lot of people that grow up in broken homes tend to come out disadvantaged, and feel this is how the world is. But as for me, I have held steadfast to the notion that my parents’ mistakes are not mine.

My dad was not around when I was growing up. My husband is very much around for our daughter. I learnt from their mistakes because they were both musicians they did not know how to balance a business, and raise a family. Our daughter travels with us and goes on tours with us and we have FaceTime to do homework, or have the child sit and read for us.

We are very much involved in her life and if we can’t be there for any reason because of distance we do FaceTime” Lyons explained.

Asked if she saw herself as a strong Caribbean woman she cheekily said: “I would hope so, because if I don’t, then I would be very disappointed in myself. I am an evolving strong woman because I have found that the things I thought I was strong in are no longer needed in that particular aspect from an emotional standpoint so I have a psychological and spiritual strength. I tend to be strong when necessary, and strong to understand that strength sometimes comes from trusting people to be a friend.”

“I think even that concept (strong woman) is constantly being reviewed and revised by women, because the strong woman of today is not the strong woman of yesterday. Every year, everyday women are giving new reasons to define the word strong. This is a good thing which means we are growing. Things that our grandmothers and mothers saw as okay or commonplace like saying long ago girls should be seen and not heard, and now we have statements and quotes coming out that say that quiet women seldom make history” she said.

Loving the fact that she has a lot of creative freedom to define herself as an artiste she told Caribbean POSH: “I get to be me, because don’t work for anybody who says “do this”, “do that”. I get to dictate how I sound, and to write what I sing. I am involved in production. We basically work for ourselves which a lot of artistes don’t get to do.”

“A lot of artistes try to push how they look first, and obviously sex sells. I will go sexy, but not so sexy that it takes away from what I am saying or doing. I want to come on stage fully clothed, rip up the place, and then decide to come on stage the next day in a risqué sexy outfit, because I am of the notion that I will still get people’s interest, not because of how I dress.”

“My body will change, but my music will not. In years to come, when I am no longer able to put on the outfits I put on now, I will still be able to walk on stage and people will say I still like that song” according to Lyons.

Right now, “we are happy, but while we celebrate we know there’s a lot more that still needs to be done. At the same time, we thank people like Morgan Heritage and Charly Blacks just to name a few for showing love and support” she said.