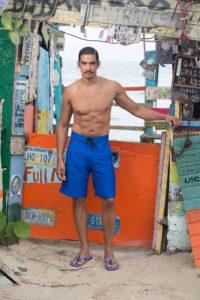 POSH recently sat down with Hector Lincoln, a true Jamaican original.  He is a pragmatist, a dreamer, a go-getter, and as he says, “Not necessarily in that order.”  We wanted to get to know him, and with his delightful sense of humor, we really did.

Hector attended various schools in Jamaica, Florida and New York, as well as Canada and England.  But being from Jamaica is his pride and joy and he told us that the culture and his appreciation of it, gives him a great sense of satisfaction.  Interestingly, being a successful actor and model was due to his eclectic look:  He is an Afro, Asian (Chinese), Arabic, Jewish (Sephardic, Anglo (Scottish, Dutch, and a Latino son of the Caribbean.  “A mix-breed,” and as he says with a smile, “in the Caribbean, ‘Nuff mix-up deh bout.’”

Everyone in his family is very theatrical and a, “Bunch of passionate thinkers from all walks of life.”  His father was his biggest influence and his earliest memories were performing at his dad’s urging.  It was an accidental event more or less, since he did his first television commercial when he was just four years old.  His mother was also a model, so he definitely came by the modeling gig honestly.  His early modeling was theatrical and meant to be entertaining, and that sort of lead into acting quite naturally when he landed a weekly children’s television show part.

Then as a teen, he entered a contest that he won giving him entrée into agencies around the world.  “I think that’s when the transition from actor to model took place.  Modeling allowed me to see the world, people, places, experiences that as an actor starting out is almost unheard of, but for a model it’s common place,” he explained.  Booking commercials as a model, allowed him access into the Screen Actors Guild, and once he settled into New York City as his base, he went back to school to study his first love:  theater and acting.

When asked if he were not acting what other career choice would he be interested in, he expressed a definite interest in becoming a Human Rights or International Law attorney.  But the enjoyment of acting and the process of discovering the characters he plays, walking in their shoes, and learning to become those persons, are the most fun and most challenging too.

Discussing the fashion and entertainment industry in the Caribbean vs. the U.S. was most eye opening.  He expressed that,

“In the Caribbean it still is looked on as entertainment while in the U.S. the fashion industry is considered a business.  I’m not saying that in the Caribbean it’s not a business, it is by those who are able to do it as such, but I think by and large it’s not taken as seriously as it should be.  It doesn’t help that certain trade agreements have virtually crippled many ‘cottage’ industries that don’t allow local designers to compete with the cheaper goods that flood the markets.  Forgive me for being political here, but it is very rare to see local designers doing better than foreign designers in the Caribbean.”

Politics aside, Hector’s 10 years living in New York, has brought him to defining moments such as having been booked as for a guest- starring role on a TV show called Life On Mars that featured star Harvey Keitel, one of Hector’s all time favorite actors.  “My first day on set I was taken to hair and makeup and it was pretty dramatic hair and make-up since I was playing a 1970s Pimp with an Afro, sideburns, and all.  The next thing I knew Mr. Keitel is sitting next to me saying, ‘I’m Harvey and you must be the Pimp.’ I introduced myself and got to watch and work with him for the week.  It was interested to observe someone like Keitel who is schooled in ‘The Method’ do a one hour TV episodic that is so formula, to say the least.  He challenged the writers and the director by saying that, ‘My character would never say that!’ It was incredible how much I learned from him.” 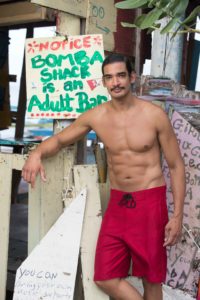 Hector has guest starred recently on a new Netflix show called Friends From College, that will premier in Spring/Summer of 2017.  Should a show biz genie suddenly appear to grant him a wish, we asked, the quick reply was:  “To have a series regular on a prime time episodic.  A role in which I can play someone who is the mastermind, but who is unassuming; a role similar to that of Keyser Soze, played by Kevin Spacey in The Usual Suspects; that would be genius.”

We followed up with wanting to know what his favorite actor or actress was, he ticked off a few.  Of course, Harvey Keitel was mentioned as was Denzel Washington, Marlon Brando, Meryle Streep, Javier Bardem, Viola Davis…Bette Davis, Laurence Fishburne, and definitely Samuel L. Jackson.  As far as models he doesn’t have one except – “It’s all about Naomi Campbell all the time lol.”

As to Caribbean designers he has worked with and whose products he loves, they are: Yardsmanstyle, Bill Edwards, The Cloth, Trefle, Meiling & Cooyah.  International designers such as Levi’s, Dr. Martens, American Apparel, Calvin Klein, Uniqlo, and H&M are his usual everyday wardrobe choices.  His personal style is easy, ready to wear, comfortable and classic with a little modern trendy-ish thrown in.

Hector himself is a class act and in closing we asked what words of advise he would have for any young person from the Caribbean interested in pursuing modeling or acting.  “Study, learn as much as you can.  Love it because if you don’t, you’re not going to be happy.  Be practical; know yourself.  Know your type and what you’re going out for.”  Surely great advise from a great guy.