Mishael Morgan: From Trinidad to Young & the Restless 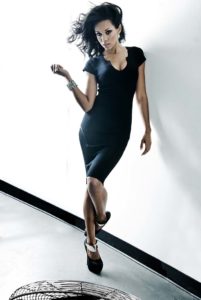 Mishael Morgan was born in San Fernando, Trinidad and is a real Caribbean woman in the sense that she knows the beauty of island culture and its people intimately despite her family moving to Canada when she was 5 years old.  Her acting talents were honed early on in her youth, even though she did not know then where it would all lead.  Mishael caught the acting bug at the age of ten, when she was cast as Joseph for her elementary school’s production of Joseph and the Amazing Technicolor Dream Coat. She told us that, “I never felt more alive than that first time on stage.  I have never forgotten it.”

She went on to study at York University and bartending to make ends meet, but not pursuing acting seriously until a chance meeting with her now agent, David Ritchie.  Ritchie convinced her to audition one day. Impressing the producers, she landed a role in Trey Songz’s Wonder Woman music video. A short ten months later in 2009, she worked on a first series-regular role as Tracy Dupont-Roymont, in YTV’s Family Biz. Mishael has continued to make her name known in the world of film and television with roles on popular TV shows like The Best Years, Republic of Doyle and of course the Caribbean favorite:  The Young & the Restless, where her role as Hilary Curtis steals the scenes!  This summer, she also starred in the comedy series called Backpackers.  Feature films like Casino Jack and Total Recall also show her acting skills full force.

Talking to Caribbean POSH, she expressed many things.  “I feel blessed to work with all the people I watched since I was five years old.  I have known all the cast names and to work with them now, is one of the best experiences of my life! The soap opera, The Young and the Restless has been wonderful; adding Caribbean people to the cast is also wonderful.  Caribbean nationals making real headway in getting involved in major U.S. based entertainment outlets is encouraging.  The world too, is more mobile now and getting from place to place is easier.  Our culture is shifting also; production companies are more ethnically diverse.”

Her parents’ focus was on academia; to encourage their children to become professionals like being a doctor or lawyer.  Then, when a near death car accident during a visit to Trinidad broke her neck, she realized that you have to do what you love.  “Because life is too short, I had a chance to rethink my life; this is when I met my agent.  I began my own company, my agent invited me to work with him, and the rest is history.”

Asked how she would inspire Caribbean people because as we need to be encouraged to do what we would do.  She wisely said, “This business is a unique journey for most people.  Families tend to push their kids into it.  Some people like me – it just happens by fluke and a lot of hard work after that.  It was not easy.  The pitfalls are there – audition after audition.  At the end of the day you have to keep the faith and believe in yourself.  No one believes in you more than you do.  More doors will open if you have that faith in yourself.”  She told us that every day she is blown away by the fact that she is really, really working on the Young & Restless show, even after a long, hard 12-hour day. 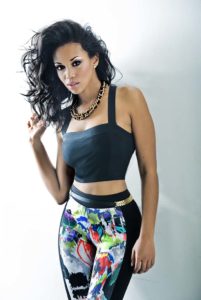 On a personal note, she shared with us that she has grown to love working out because she loves to eat and is a foodie to the max!  “When I worked on the series Backpackers, we traveled from place to place on a bus all over Europe, eating all sorts of interesting street food.  I love to eat street food because it reminds me of the way we ate on the side of the road, or on the beaches of Trinidad, where you sit around with friends and family.”

When asked about some of her favorite designers she listed a few such as Steve Madden and Jimmy Choo shoes, Kate Spade’s awesome clothes, and a designer of the gorgeous dress she wore to the Daytime Emmy award, Dolly McPhee, a Canadian designer who she follows.  We asked about her fitness and beauty regiments:  “I try to eat healthy as much as I can.  I think that helps your skin.  My favorite line is Philosophy, and I exfoliate my facial skin once a week and wash my face twice a day.”

Mishael makes being beautiful look so easy, but truth be told, she is beautiful on the inside too.  We look forward to continuing to see her on the Y&R not only to see her radiance, but also to see how that love triangle unfolds!

This article previously appeared in our 2014 Style Issue