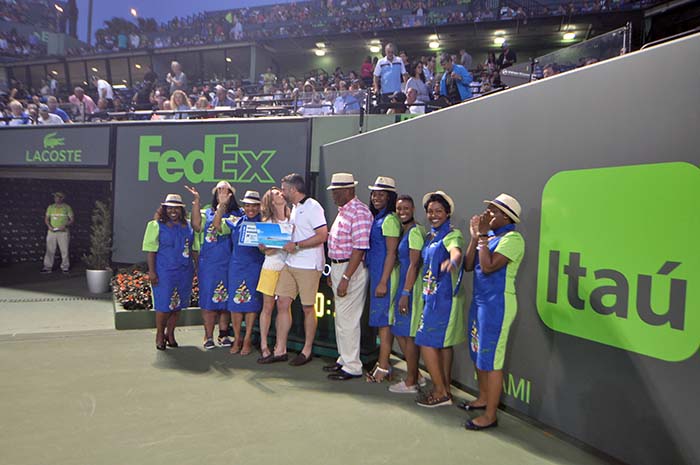 Sean Rose, April 2017… The March 20th to April 2nd 2017 staging of the Miami Open at the Tennis Center in Crandon Park, Key Biscayne Miami, Florida, was the stage for another round of riveting tennis action featuring some of the biggest names in the game; Venus Williams, Rafael Nadal, Johanna Konta, among others. For 12 days Crandon Park buzzed with activity even as animated groans, ooohs and ahhhs, laughter and applause emanated from the venue spurred on by some intriguing display of tennis action. There was much fun and excitement to go around as thousands eye-balled the many exhibits, shows, and of course, the rocket fast serves, forehand and backhand shots, volleys, drop shots, lobs and other reciting tennis action out on center court.

Being an avid tennis spectator, I journeyed to Crandon Park to rub shoulders with Director of Tourism, at the British Virgin Islands Tourist Board, my friend Sharon Flax-Brutus, Board Director Russel Harrigan and other members of the team, and a group of friends, who are also major tourism stakeholders in BVI. That level of collaboration between the business community and the main agency responsible for tourism management and promotion is, in my view a recipe for success for the BVI. It is a recipe other Caribbean tourism destinations ought to emulate. The BVI was the only island destination flying their national flag at this year’s Miami Open. It was the first of such outings for the Tourist Board as well, and they served up some excellent moves on and off court. From a niche marketing perspective, I am very impressed with the decision to parade brand BVI in full view of the thousands of Miami Open fans at Crandon Park, and the millions who viewed the games on television or followed via Social Media. 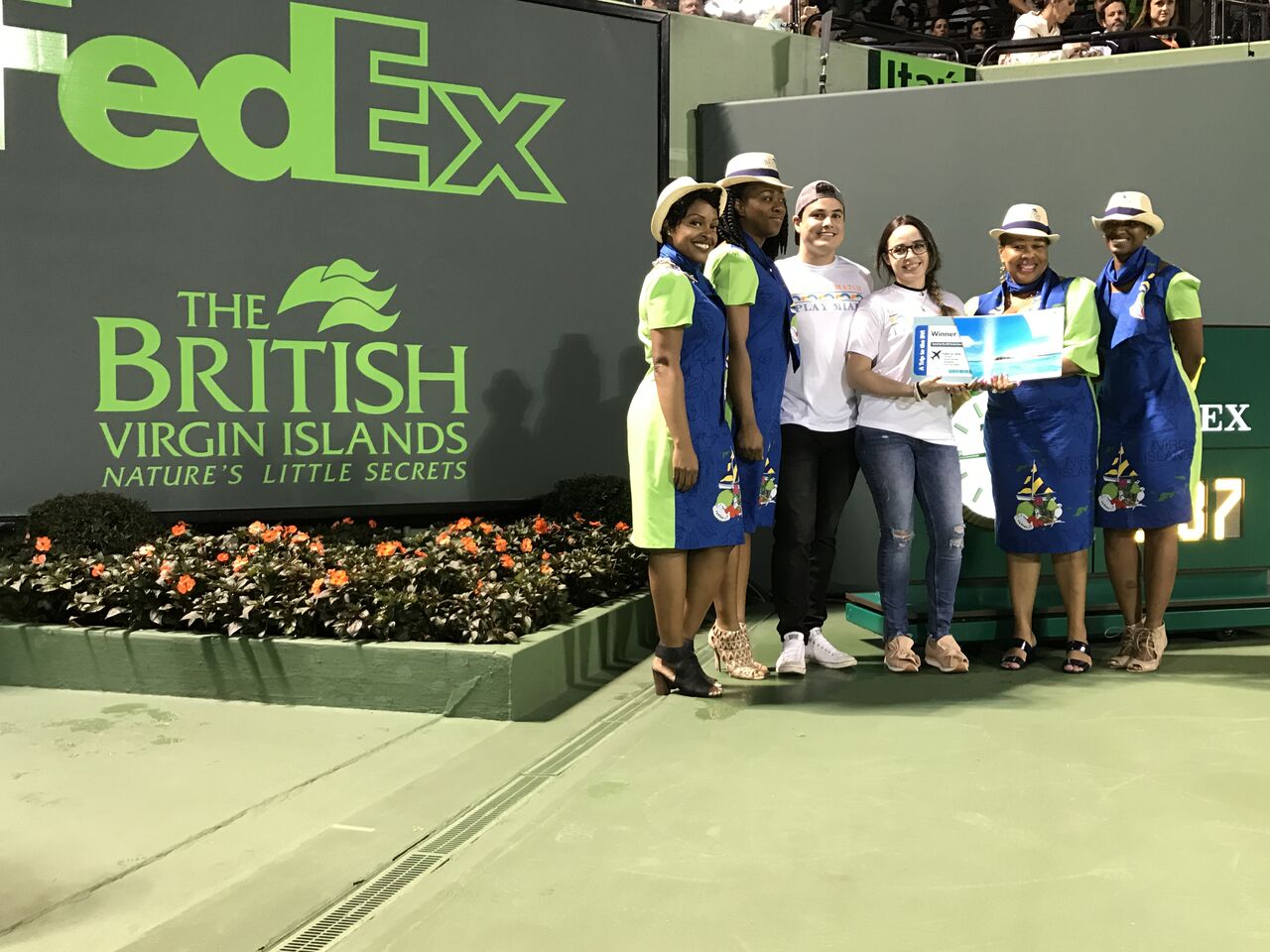 BVI Welcomes One Million Visitors for the First Time

As I reflect on what the BVI has done, within recent times in particular, to boost its own tourism sector, and I take into consideration the fact that many expatriates from across the Caribbean, are active beneficiaries and contributors to that territory’s hospitality sector, I appreciate even more the need for new and creative efforts to promote our respective countries, and ultimately our region, to the world. It simply isn’t business as usual. While television advertising and other traditional methods may still have a place, the need for unconventional strategies has become even more apparent. The BVI Tourist Board is moving in the right direction, in my humble estimation. How can I validate my endorsement of BVI tourism? While I’m not for one moment suggesting they have achieved perfection, the facts, however, are indisputable.

BVI tourism arrival figures for January to July 2016 opened magnificently with an overall increase of 27.3 percent for all visitors, when compared to the same period in 2015, according to data from the BVI’s Central Statistics Office (CSO). The destination went on to deliver some rocket fast serves, to earn record high score of 1,122,671 visitor arrivals to close out 2016.

The BVI CSO reports that there were 406,027 overnight visitors documented at the end of 2016. This marks the first time in history that the BVI surpassed the 400,000 overnight visitor mark. In fact, over the five-year period-2012 to 2016, overnight arrivals increased by 15.5 percent for an annual percentage growth rate of 3.1 percent. The British Virgin Islands tourism sector is recording consistent growth, as indicated by an increase in overnight visitor arrivals during 2016. The figures speak for themselves ladies and gentlemen. The tourism sector remains a vital component of our Caribbean economies. To remain competitive, several destinations across the region are challenged to invest heavily in marketing and product development. Skeptics often question the value of such investments largely because many deliverables in the industry are intangible by nature. The figures for tourist arrivals are quite often a popular yardstick used to either measure the performance of the tourism stakeholders, or beat them into admission of dismal failure. The BVI officials may very well be in celebratory mood to this day. 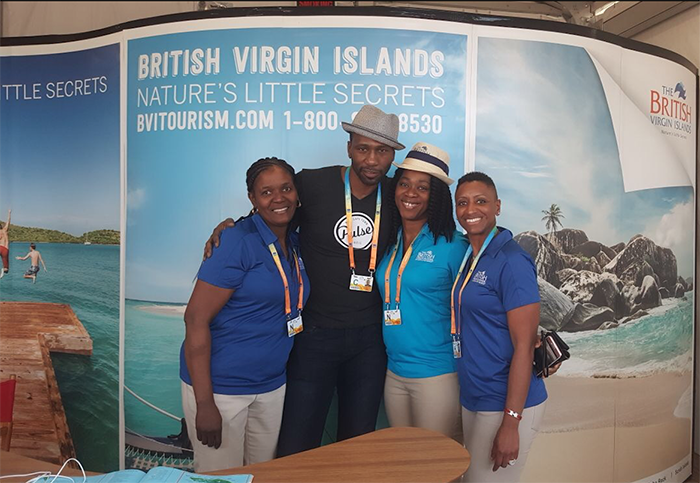 The Caribbean Tourism Organization (CTO) says Marry Caribbean (www.MarryCaribbean.com), the leading online resource for Destination Weddings & Honeymoons in the Caribbean has signed Melanie Reffes as the exclusive journalist for the Caribbean Romance Report. Melanie Reffes is a seasoned travel journalist and television producer, renowned for her coverage of the Caribbean. She is published throughout the USA, Canada and Caribbean and is a contributor to the official websites of the Caribbean Tourism Development Company and the Caribbean Hotel & Tourism Association (CHTA).  The Caribbean Romance Report offers insider information and reviews for hotels, restaurants and activities across the Caribbean’s 33 countries, the CTO says. The romance market, which includes destination weddings, honeymoons, vow renewals and getaways for those who want to embark on a romantic Caribbean jaunt, can find all the information they need through this exciting new report on www.MarryCaribbean.com.

I found that release from the CTO relevant to the niche marketing strengths of our Caribbean destinations. It brought to my mind September 13, 2012 when to say “I do” became a whole lot easier for couples who chose destination British Virgin Islands (BVI) for their nuptials. The BVI’s decision to amend its Marriage Act (Cap 272): Residency requirements for ‘Special License’ shortened the process from three (3) days to one (1) day; a new fee schedule was introduced, and the steps to obtain a license were all transferred to the Civil Registry for a ‘One Stop Shop’ process. Couples seeking to travel to BVI for their nuptials can also begin their wedding application online before arriving in the BVI, by submitting their information through the Government’s new Civil Registry Information System (CRIS) at www.crisvi.gov.vg.

In summary, there is much to gain from a collaborative approach to help boost tourism marketing and improve the services offered by any destination across the region. Collaboration among industry partners in any form improves our marketing impact and should not be viewed as a threat. No one agency can do it alone. Rather than playing blame games or dedicating quality time to fault finding missions, many political parties, whether in opposition or in government, public private sector agencies and Non-Governmental Organizations ought to establish mutual relationships to help improve, protect and promote our their respective tourism product. As the saying goes, tourism is you, tourism is me.

Observers and experts may differ in opinion in their respective evaluation of the global tourism market, and the strategies necessary to achieve success for the Caribbean, both from the perspective of singular destinations and as a regional bloc. Nonetheless, many of contrary opinions are likely to agree that there is room for more collaborative efforts, to help our small island states and territories remain competitive in today’s international business of travel and leisure. Congrats to Sharon Flax Brutus and her team at the BVI Tourist Board for showing leadership in that regard and the record high results they have achieved. That marriage between tourism and tennis surely offers effective niche marketing opportunities for Nature’s Little Secrets. Bon Voyage!